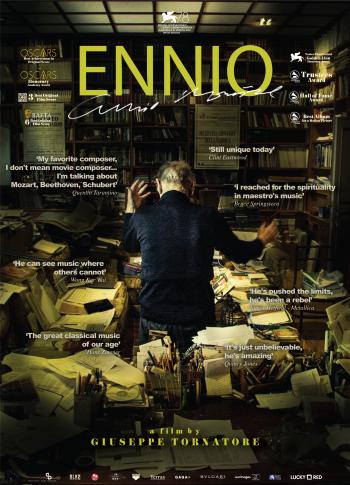 PG
Giuseppe Tornatore
Giuseppe Tornatore was born in Bagheria, outside Palermo. As a teenager, he became interested in theatre, staging works by Luigi Pirandello and Eduardo De Filippo while working as a photographer. He then worked at Italian state broadcaster RAI before making his first feature, The Professor (1985) at the age of 29. Four years later, his best-known film Cinema Paradiso – the reminiscences of a successful film director who revisits the village where he grew up - became an international success, winning the Oscar for Best Foreign Film. It was also the beginning of a lifelong association with film musical maestro Ennio Morricone, the subject of Tornatore’s critically acclaimed new documentary Ennio.
Other films by Giuseppe Tornatore include A Pure Formality (1994) with Gerard Depardieu and Roman Polanski, Malena (2000) with Monica Bellucci, The Best Offer (2013) with Geoffrey Rush and Jim Sturgess and The Correspondence (2015), starring Jeremy Irons and Olga Kurylenko, for which Morricone wrote his last film score.

International Sales Agent
Block 2 Distribution
Ennio Morricone, arguably the greatest composer in cinema history, died last year at the age of 91. He had scored around 500 films, including more than 70 award-winners such as “The Good, the Bad and the Ugly”, “The Hateful Eight”, and “Once Upon a Time in America”. Director Giuseppe Tornatore celebrates the man and his work with a long interview he did with Morricone five years before he died that provides intriguing insights into what inspired him. Tantalizing film clips and interviews with admirers and collaborators––Tarantino, Eastwood and Bertolucci among them––intersperse the maestro’s own testimony, crafting a fitting tribute to a legend.