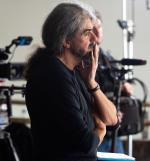 International Sales Agent
MK2 Films
Spanish star Javier Bardem plays Blanco, the ostensibly caring owner of a company making industrial scales. Blanco is a master of making his workers feel wanted, but these are challenging economic times, and he readily sacks anyone who is no longer needed. When real trouble comes, first from a former employee who starts a one-man protest camp at the factory gate, then from an unexpectedly cunning young intern, Blanco shows his true colours. As it turns out, he would do anything to retain his power. “The Good Boss” is a blistering satire on capitalism and patriarchy with an outstanding central performance from Bardem.