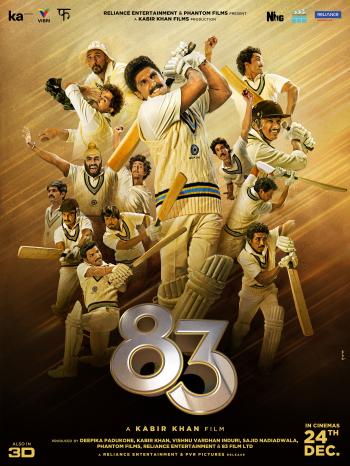 Production Company
Reliance Entertainment, Phantom Films, Kabir Khan Films, KA Productions, Nadiadwala Grandson Entertainment, Vibri Media
In 1983, the charismatic Kapil Dev (Ranveer Singh) led the Indian cricket team to its first World Cup victory at the hallowed Lord’s Cricket Ground in London against the West Indies, regarded at the time as invincible. A generation of Indian children was inspired to take up the game and, more broadly, to aim high in life; the anniversary is still celebrated, 38 years on. Kabir Khan’s Hindi epic tells this triumphant story with fastidious attention to detail – the actors trained for months with the real cricketers they were playing to understand the nuances of the sport – and a huge narrative sweep.

Terms & Conditions:
Red Sea International Film Festival are excited to be holding this World Premiere. The Filmmakers have kindly agreed to share this film with our audience and they hope audiences around the world see the film without any of the wonderful surprises being spoilt. We ask that you do not write a full review of the movie before the 23 of December, and sign the accompanying form and bring it to the premiere.You can of course say how you feel about the film on social media.