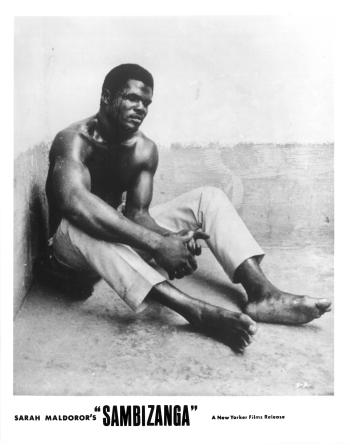 PG12
Play Trailer
Sarah Maldoror
She was a director of African descent born in 1929 in France, considered matriarch of African cinema, and the first woman of color to make a feature film. She celebrated cinema and art's political commitment as an act of freedom; known for “Sambizanga” (1972); “Monangambé” (1968); and “Des fusils pour Banta” (1970).

Scriptwriter
Maurice Pons, Mario De Andre
Sarah Maldoror, a pioneer of African film-making, brings a woman’s perspective to the explosive beginnings of the Angolan war of independence. Shot in the Congo, her film is adapted from a novella called The Real Life of Domingos Xavier by Jose Luandino Vieira, which was itself based on real events. The Sambizanga district of Luanda was home to a Portuguese prison where militants were incarcerated and tortured under the colonial regime. The film follows the radical Maria (played by Cape Verde economist Elisa Andrade) as she searches for her missing husband Xavier. His discovery in Sambizanga triggers an attack on the prison by the Popular Movement for the Liberation of Angola – of which Maldoror’s own husband was a leader – and, ultimately, a national uprising. According to British critic Mark Cousins, the cast of activist non-professionals brings conviction to a film that is as beautifully lit as a Caravaggio painting.