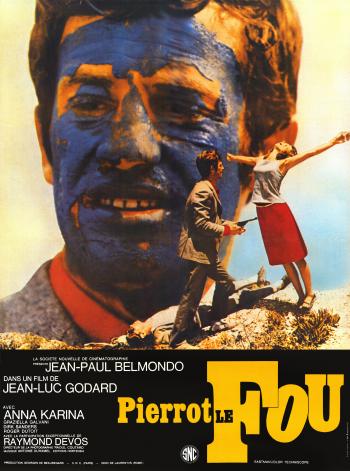 Jean-Luc Godard
Jean-Luc Godard rose to prominence with the French New Wave of the 1960s to become one of the world’s most innovative and influential film-makers.
Producer
Georges De Beauregard

International Sales Agent
Studio Canal, Tamasa Distribution
New Wave visionary Jean-Luc Godard Godard’s 1965 masterpiece stars Jean-Paul Belmondo as Ferdinand, who suddenly decides to ditch his dull life as decorative husband to a rich wife and escape with the captivating Marianne, played by the director’s companion Anna Karina. Thus begins a road movie, bathed in the warm sun of the south of France, that includes elements of musical comedy, film noir and flamboyant melodrama. The actors tell their stories directly to camera, a technique that can still startle us; both light-hearted and tragic, the film’s celebration of a folie-a-deux is also a portrait of an era.