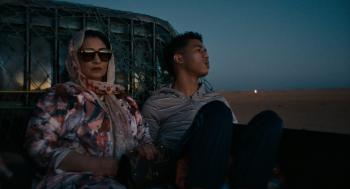 Fyzal Boulifa
Writer and director based between Paris, London, and Tangier. He absorbed the art of cinema by watching and shooting as many films as he could. His shorts have been twice awarded at the Directors' Fortnight of Cannes, and nominated at the BAFTAs. His first feature, Lynn+Lucy (2019) earned him several festival award nominations and wins.

Middle East Distribution
MAD Solutions
After two award-winning short films at the Directors' Fortnight under his belt, Fyzal Boulifa proved himself as a talented writer with his first feature film, Lynn + Lucy. In his latest film “The Damned don’t cry”, we are following two strong characters, Fatima-Zahra who travels with Sélim, her eldest son. It is against their will that they move from one place of accommodation to another and from village to village, they are chased not by poverty or violence but by… scandal, which pursues Fatima-Zahra wherever she goes, like the heavy perfumes she adorns herself with. When Selim discovers the truth about their past, Fatima-Zahra vows to make a fresh start. In Tangier, new opportunities promise the legitimacy they each crave but not without pushing the volatile mother-son relationship to the breaking point. There is nothing “mocking” about this portrait, Boulifa's fine writing preserves the character's dignity without hiding it's pathetic and poignant dimension nor masking the more or less latent violence of each line and situation. “The Damned don’t cry” is actually a double portrait. The daring structure of the script does not go where expected and smoothly alternating between protagonists, passing from mother to son.