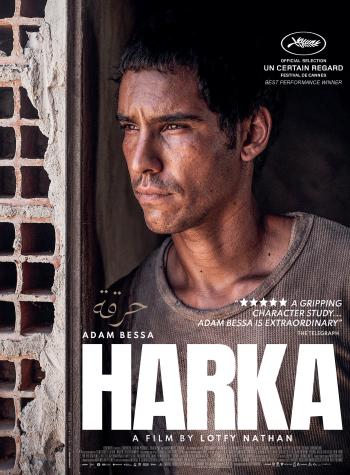 Play Trailer
Lotfy Nathan
Lotfy Nathan’s first documentary film, 12 O’CLOCK BOYS, for which he was awarded the HBO emerging artist award, played over 50 film festivals worldwide, including SXSW, Sundance NEXT, Lincoln Center, Viennale, Hot Docs, London, and Copenhagen. 12 O’Clock Boys was distributed by Oscilloscope for a North American release in theaters, acquired by Showtime Amazon, and Criterion Channel, and remade as CHARM CITY KINGS with Sony Pictures. Lotfy is a grantee of the Creative Capital foundation, the Cinereach foundation, and a previous awardee of the Garrett Scott grant, the Peter Reed foundation, the Grainger Marburg grant, the IFP fellowship, the Red Sea development fund, and The Doha Film Fund. His first fiction feature, HARKA, premiered at Cannes Film Festival Un Certain Regard 2022 where it won best actor.

Scriptwriter
Lotfy Nathan
Harka is an impassioned plea for social justice set in Sidi Bouzid, the Tunisian city where the self-immolation of street vendor Mohamed Bouazizi in 2010 triggered the Jasmine Revolution. The thriller contains a powerhouse performance from French-Tunisian actor Adam Bessa as Ali, an impoverished street-seller whose predicament is inspired by Bouazizi's story. Ali sells black market gasoline, risking his life every time he heads into the desert to buy supplies, but he's obliged to turn over most of his earnings in extortion payments to the police. Burdened by debts since his father's death and now responsible for his two younger sisters, he has to beg his brother – who has escaped the family to work as a waiter at a tourist hotel – for support. Director Lotfy Nathan's fictional debut was a stand-out in this year's Cannes Film Festival's Certain Regard section, where Bessa won the award for best performance. This film is supported by the Red Sea Fund.